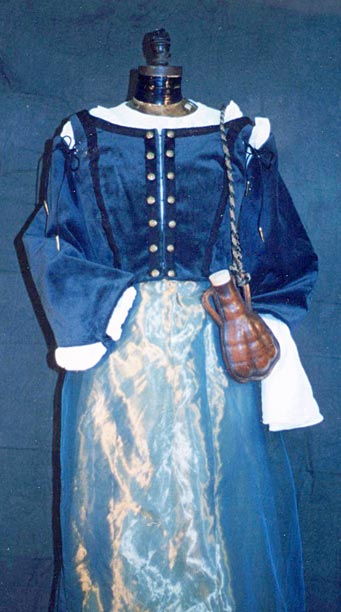 Nice renaissance costume. Upholstery velvet bodice with brass buttons and separate sleeves held on by silk cord with metal tips. I took a lot of care making this bodice. I wore it with several different skirts and a fine linen chemise. The sleeve was slit and allowed the chemise to show on the bottom edge. The gourd is not period for this costume. 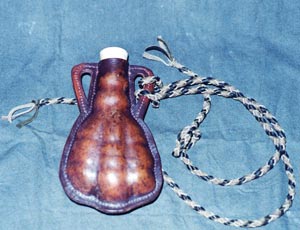 This Cuir Bouilli gourd is not period for renaissance Italy which is the gown. The gourd would be closer to Elizabethan England. It was formed by sculpting a half wood form and shaping each half by hammering the wet vegetable tanned cowhide gradually forming it to the form. The original hammer was sometimes made from the tip of a cow horn. The tip could push the soft wet leather into detailed parts of the mold compressing the leather and making it quite dense. It is a similar technique used to make fine leather masks. It takes quite a lot of work to shape each half of the cuir bouilli bottle. The 2 halves are then stitched together by hand and the shape cut out. Once the shape has been cleaned up with a sharp knife, the opening is stretched on its cork so it fits well. It is quite stiff but not very hard at that point.

The cuir bouilli bottle is then heated and covered with wax. It absorbs a surprising large amount of wax and once cool is very hard and rings like it was made of wood.

Similar techniques were used to make shaped leather armour. It is extremely stiff and quite hard particularly if it is reinforced with metal bits. The gourd could easily hold water because of the thorough waxing with beeswax inside and out.

This Mid 1400 medieval gown was very fun to wear. It has long sleeves almost to the floor with a leaf cut out. The blue is quite fine wool. It was cut longer than floor length and dragged on the ground showing affluence! The lining was a silk fabric with quite a lot of body. I think it could have been fur in a real period garment. The stand up collar was stiffened quite a lot and the cream border had brass medallions attached. (Gold was a bit too pricey!)

The belt is worn quite high just below the bust. Fashion then was to have a bit of a belly sticking out. The turban is period and there are any number of pictures of variations. Sometimes a real turban, sometimes just a stuffed band as this one is. I think it could have had a veil. Fashion I think was quite changing when it comes to head dress at this period.

Wearing this dress was annoying because it dragged and had to be supported by one hand. It was made too long to show you were a rich chappie and could afford it.

Fur in the sleeves was not unusual and also showed affluence.